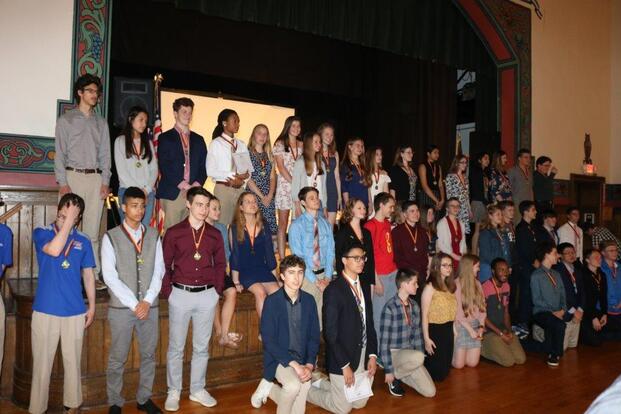 The German Society of Maryland and the Maryland-DC Metro Chapter of the AATG joined together on Sunday, May 5, to honor outstanding Maryland students of German at an awards ceremony in Zion Church’s historic Adlersaal.  Parents, friends and teachers of about 78 students gathered to celebrate their achievements.  Dr. Mohamed Esa (McDaniel College) officiated as Chapter Testing Chair and gave the 66 Goldurkunde honorees and 12 Silberurkunde honorees their Chapter certificate while James Schaub, President, German Society of Maryland, handed each student a cash award for high achievement on the National German Exam.  Marian Graham, Chapter President, gave each honoree the corresponding AATG medal.  Guest speakers Birgit Alberg, Cultural Department of the German Embassy, Alison Paul, Goethe-Institut and Helmut Kehlenbeck, German Language Advisor USA Northeast, Central Agency for Schools Abroad (Zentralstelle für Auslandsschulwesen) all addressed the relevance of learning German to secure a place in the global job market.  AATG/PAD Summer Study Trip winner Daniel Klein (Marriotts Ridge H.S.) made a presentation on his three-week stay in Nuremberg while Andres Moises Alvarez (DeMatha Catholic H.S.), winner of the German Society of Maryland's summer study trip scholarship, presented on his Study Trip to Leipzig.  Both past president Amanda Sheffer and Marian Graham, acting president, were acknowledged for their past service to the Chapter. Amanda Sheffer later received the 2019 Service Award (visit Teacher Awards), which commended her for her exceptional service to the Chapter during her years on the board and as Chapter President.

The AATG Maryland-DC Metro chapter held its 26th annual awards ceremony to recognize high achievement on the 2018 National German Exam on a beautiful, spring Sunday afternoon, May 20, 2018, in the sanctuary of the Zionkirche.  Approximately 100 dignitaries, friends and family of the 85 gold and silver medal winners watched as the honorees received their medals, certificates and cash prizes, generously donated by the German Society of Maryland (GSM).

The ceremony began with Bernard Penner, Zionskirche archivist, speaking on the history of the Zionkirche, founded by German immigrants in 1775.  Congratulatory remarks by Kurt Wittstadt, President, GSM, Eileen Sellman, Goethe-Institut, Washington, DC, and Helmut Kehlenbeck, German Language Advisor USA Northeast, Central Agency for Schools Abroad (Zentralstelle für Auslandsschulwesen) followed.  All speakers addressed the theme of the importance of being bilingual in today’s globalized world and encouraged the honorees to maintain and expand their knowledge of German.  Elif Akbas, Naige Correal-Winters, Anjali Gajendiran and Jessica McCarthy, all students of Daniel Desmond, Centennial High School, Ellicott City, Md., then entertained guests with a joint reading of Erlkönig to celebrate the German language.

On April 23, the Maryland-DC Metro Chapter held its annual awards ceremony in the Adlersaal of Baltimore's historic Zion Church.  Approximately 60 Maryland students were honored for their exemplary performance on the National German Exam, levels 2-4.  Amanda Sheffer, Chapter President, and Hal Boland, President of the AATG's Executive Council, provided words of welcome.  Jan Eckendorf, Cultural Department of the German Embassy, spoke on the value of learning languages, especially German, in today's world.  Anton Smoot, President of the German Society of Maryland, which again issued a $5,000 grant to the chapter to fund the cash awards students received, handed the students their cash awards and Marian Graham, Chapter Testing Chair, gave the students their Chapter certificate.  Board members participated in the ceremony as well by bestowing the AATG medals on the students.  During the ceremony, Sarah Ross (Fallston H.S.) presented on her triip to Germany, partially funded by the German Society of Maryland's Gerhard Meinzer Summer Study Trip Scholarship.  Entertainment was provided by the Spotsylvania Alpentaenzer (Courtland H.S.), Bettina Hoeninger, sponsor.  In addition to cash awards, students received gift bags, courtesy of the German Embassy, filled with prizes.  Another major donor this year was German Language Courses at the German School Washington D.C., which celebrates its 40th anniversary this year.
German Student Awards Ceremony 2016
The German Society of Maryland and the Maryland-DC Metro Chapter of the AATG joined together on Sunday, May 22, to honor outstanding Maryland students of German at an awards ceremony in Zion Church’s historic Adlersaal.  Parents, friends and teachers of about 75 students gathered to celebrate these achievements.

This is the fifth year in a row that the German Society is giving an outstanding high school student the opportunity to study in Germany during the summer with the AATG Summer Program. The winner of this year’s Gerhard Meinzer Summer Scholarship is Sarah Ross, a student at Fallston High School. Sarah is an honor student as well as a member of the International Thespian Society and the Fallston Dance Company. She has chosen to study in Bonn this summer. She will live with a German family and study at a German high school.

Eleanor Young, the winner of the 2015 Gerhard Meinzer Summer Scholarship, presented on her trip outside of Leipzig, Germany. Eleanor is a student at North County High School. She showed pictures of her host family, school friends, and the many places they visited. She loved Berlin, but was especially fond of Dresden. Lauren Beckjord, the winner of last year’s AATG Summer Trip, also gave her presentation. Lauren agreed with Eleanor that the culture shock was more than just the language difference, but it was still a great experience.

For entertainment during the ceremony, a member of the Maryland Lyric Opera, Matthew Woorman, and former German student at The Catholic University of America, sang several opera selections.

Thanks to Marian Graham, the AATG Chapter Testing Chair, who organized the event on a wonderful program. She called out the names of this year’s high school student winners. 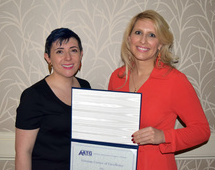 ​German Embassy Teacher of Excellence: Cora Hofstetter
AATG -MD member Cora Hofstetter has been chosen as one of the 2015 German Embassy Teacher of Excellence Award recipients. The award is given annually to three educators who are new to the profession and have helped grow the German program at their schools. Ms. Hofstetter emphasises learner-centerd instruction and learning through group problem-solving. She has also organized an exchange with Bremerhaven, Germany with the help of members of the German Society of Maryland. Ms. Hofstetter teaches German and Spanish at North County High School in Glen Burnie, Maryland. Ms. Hofstetter would like to thank the board members of the AATG Maryland-DC Metro chapter for their nomination for the award and for all of their support.

​German Center of Excellence
Local public school, North County High School, was recently honored by AATG at this year's awards ceremony in San Diego. North County High School was chosen for this award based on their proficiency- and standards-based curriculum, cultural and student exchanges and efforts to align the German and STEM curricula. Read more about becoming a German Center of Excellence and other awardees 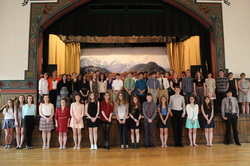 Once again this year, the Chapter joined forces with the German Society of Maryland to honor those students who excelled in their performance on the AATG National German Exam.  In 2014, the AATG inaugurated the new format for the NGE.  Students in Levels 2, 3 and 4 were tested with authentic reading and listening materials to measure their ability to use their German skills for communicative and interpretive tasks.  On Sunday, May 18, the Chapter and the GSM welcomed 64 students from area schools who scored in the 80th percentile and above to the beautiful and historic Adlersaal of the Zionskirche in Baltimore, Maryland to celebrate their linguistic accomplishments in German with their teachers and parents.  Claudia Bornholdt, President, and Deborah Mifflin, Testing Chair, presided over a joyful and enjoyable afternoon with over 200 students, teachers and parents in attendance.  Highlights included the recognition of two of our chapter students,  Jennifer Hu from McDonogh School, and Brent Strong from Fallston High School, who each were awarded a four-week Summer Study Trip to Germany through the Pädagogischer Austauschdienst (PAD).     Not only were the students showered with goody bags with prizes from the German Embassy and the Goethe Institut, but they also received a Certificate of Merit from the Chapter and a generous monetary award from the German Society.  Other supporters of the event included the Swiss Embassy, the Austrian Embassy and the German Information Center.  This year, the awards ceremony was enlivened by the delightful Alpine Volksmusik of Tom Leoni and Ian Hargreaves as they played several polkas and created a festive mood for everyone in the audience. For pictures and the full program, visit our chapter facebook album.  In addition, the German Society presented this year’s winner of the Gerhard Meinzer Summer Study and the GSM College Award.  See the German Society of Maryland for pictures and article.

Several of our chapter’s members were recently elected to important positions in the AATG. Since January (2014), Mohamed Esa (McDaniel College) is our new AATG President. He will hold this office for two years. Hal Boland (Heritage High School, Leesburg) was just elected as AATG Vice-President. He will succeed Mohamed in 2016 as the next President. In a third leadership positions on the national level, Deborah McGee Mifflin (Johns Hopkins) now serves as the representative for the Central region, to which our chapter also belongs. In this capacity, she holds a seat on the AATG Executive Committee. Congratulations to our members and much success in their new offices!

At the ACTFL conference in Orlando November 2013, we also celebrated the teachers and German program of Robinsons Secondary School in Fairfax, VA who were selected as a 2013 K-12 Center of Excellence. Congratulations to all of you!
Chapter Award Recipients
AATG / Goethe Institut Certificate of Merit Awards
College Immersion Weekends: Archive
Guidelines for the National AATG Exam and Awards Ceremony