2016
Congratulations were extended to Shirley Santora, Maureen Helinski, Brigitte May and Theodore Potthast  for many years of dedicated
service to the AATG Maryland-DC Metro Chapter events and the promotion of the study and teaching of German language, culture and civilization in our Chapter at a luncheon held during the December 2016 immersion weekend for teachers of German held at McDaniel College.
​ 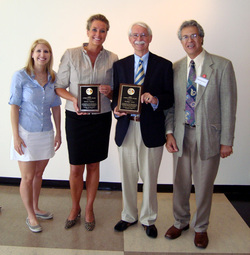 IN RECOGNITION OF AND APPRECIATION FOR OUTSTANDING CONTRIBUTIONS TO THE TEACHING
AND STUDY OF GERMAN THE FOLLOWING TEACHERS AND GROUPS HAVE BEEN HONORED:


2009
Brigitte V. Fessenden received the 2009 chapter award for her promotion of the German language and culture and for her work  on the formation of the Baltimore-Bremerhaven Sister Cities Program.
Deborah McGee Mifflin was presented with a plaque in appreciation of her six years of service as Chapter President.